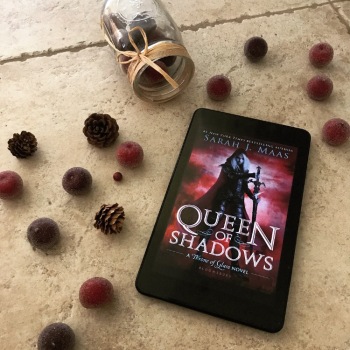 The queen has returned.

Everyone Celaena Sardothien loves has been taken from her. But she’s at last returned to the empire—for vengeance, to rescue her once-glorious kingdom, and to confront the shadows of her past…

She has embraced her identity as Aelin Galathynius, Queen of Terrasen. But before she can reclaim her throne, she must fight.

The fourth volume in the New York Times bestselling series continues Celaena’s epic journey and builds to a passionate, agonizing crescendo that might just shatter her world.

I’ve been pacing myself through the Throne of Glass series, and it’s getting harder and harder because the books just keep getting more intense and intriguing. Queen of Shadows is a wild ride from start to finish and is undoubtedly one of the most epic novels I’ve ever read.

It’s rare when a book just nails it in terms of character development, romance, plot, and action, which is why I’m so impressed that Sarah J. Maas consistently delivers on all counts. Each character gets their moment to shine in Queen of Shadows, and the amount of character development packed into this (albeit giant) novel is incredible. I came to care about characters and relationships that had irritated me in the prior books, thanks to the clever way Maas weaves in backstory and introspection without slowing down the plot.

Aelin is a wonderful mesh of the fiery, bloodthirsty assassin Celaena and the more vulnerable, scarred survivor who was thoroughly explored in Heir of Fire. I continue to be awed by her wit, grace, and growing capacity for sacrifice and selflessness.

So many other characters steal the show, as well, and I could rant for days about my love for any one of them. I’ll spare you, but I do want to call out the Witch Leader, Manon, who came out of left field and slammed me with feels. I am such a sucker for characters finding their world views tipped upside-down and having to re-craft it on their own—I loved it in Chaol’s and Dorian’s arcs in past novels, and this time it’s Manon’s turn to blow preconceived notions out of the water. You will not be disappointed with her inner turmoil and ultimate strength.

Aside from the characters on their own, the intricate relationships between them are so rewarding to watch break and rebuild and blossom. The slow burn of Aelin and Rowan is gorgeous, as is the slow-to-mend friendship and trust between Aelin and Chaol. Aelin’s reunion with Aedion had me in tears, while her first meeting with Manon had me on the edge of my seat. Dorian broke my heart all on his own … and then all over again when it came to the strength of the bonds between him, Aelin, and Chaol. I could rant. For. Days.

… and still somehow there’s enough room for me to be utterly blown away by the brilliance of the plot. My favorite thing about Maas’s writing style is how seamlessly it flows while simultaneously building careful foundations for plot points that aren’t realized until chapters or even books later. Her plots are so tight and precise, and I love the way everything snaps into focus at pivotal moments, even if the clues had been carefully hidden along the way. And Queen of Shadows, clocking in at over 600 pages, has no shortage of pivotal moments to take your breath away—I lost my mind at some of the cinematic battle scenes, and I haven’t found a novel’s ending to be so wonderfully fulfilling and emotional in quite some time. Again, in a single word: epic.

Queen of Shadows might be a giant book, but I couldn’t help but race through it. Aelin and her gang are addicting characters, and the plot and action scenes will keep you on your toes from start to finish. If there’s anyone else out there who’s super late to the Throne of Glass party like me, I can’t recommend this series enough!

2 thoughts on “Review: Queen of Shadows (Throne of Glass #4)”