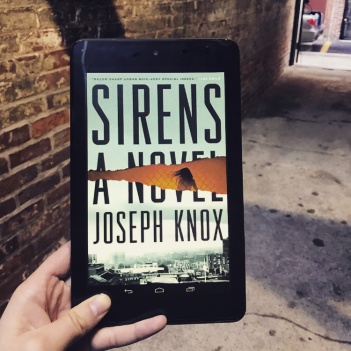 The mission is suicide.

There should be a word for it. That phantom limb, reaching out from your chest, towards things you’ll never have.

If there’s one word to describe Joseph Knox’s debut novel and the first book in the Aidan Waits series, it’s gritty. Sirens is a dark and compelling tale about the harsh realities of the drug world from the perspective of an undercover detective in far over his head. It’s a tale that will stick with you far beyond the final page.

Knox has a distinctive writing style that’s atmospheric in a completely different way from what I’m used to; in fact, it was off-putting at first. I had a hard time feeling immersed because it felt like I was being kept at arm’s length. But as the novel progresses, it becomes clear that we have the front seat to Aidan Waits’s tunnel vision as he gets tangled deeper and deeper inthe investigation that will make or break his tumultuous career. Everything from Waits’s own stumbles with addiction to the unenviable lives of the siren girls flitting in and out of Zain Carver’s home … it all paints a more vivid and visceral picture than descriptions of scenery ever could.

The characters are also a bit off-putting at first. Some felt near cookie cutter to me, and now I can’t tell you the first thing about many of them beyond the category they fall into: hired muscle, Zain’s sirens, or questionable officers of the law. Nevertheless, distinctions beyond those lines aren’t particularly important for the urban noir world Knox has created. What’s important is that every character has their own flaws and ambitions; no one is perfect, and no one is safe from the chaos and destruction of the local drug gangs. I came to be intrigued by the messy, hard-to-like cast of characters pitted against the backdrop of a bleak and corrupted Manchester. The combination of the two just feels so ominous, a mood that hangs heavy over every page.

I won’t say anything about the plot because it’s an intricate whirlwind that needs to be experienced firsthand to be done justice. But it keeps you guessing until the very end, and it’s so easy to feel like you’re in Aidan’s shoes as he tries to put the pieces together with the solution dangling just out of reach.

Overall, I was surprised to have enjoyed this book. I finished it feeling like it was outside my comfort zone, despite crime fiction being a favorite genre of mine, and feeling like it was missing some of the key elements that usually lead me to love a novel. So I shouldn’t have liked it, and yet, Knox’s writing has such a magnetic pull that I could never walk away, could barely put it down. Sirens is a novel full of sharp edges and dark corners, just as captivating as it is haunting, and I’m glad that I took a chance on Aidan Wait’s dangerous, gritty world.

Girl Made of Stars • ⭐️x5 • *Reappears after basically a year to scream about how absolutely important this novel is* A phenomenally moving and all-too-relevant story that doesn't shy away from the hard questions. My heart ached for Mara as she struggled to find some sense of truth and closure for herself, for her family, and for Hannah. This powerhouse of a novel covers a wide range of heavy topics, including slut shaming, victim blaming, consent, sexuality, and PTSD. I screamed, I cried, I felt sick to my stomach. Read. This. Book.
The Death and Life of Eleanor Parker • ⭐️x4 • A genre-defying, original spin on investigating your own murder ... after the fact. I had a blast following Ellie as she tries to unravel how the events of the previous evening could have led to her being drowned in the same river where her brother's girlfriend died a year before. Everyone's a suspect, and the stakes are high. With plenty of unique twists and a refreshing protagonist, this one will keep you on your toes!
Rough Justice • ⭐️x4.5 • The best feeling after a great series comes to an end? When the author releases a new novella giving you a snapshot into your favorite characters' lives 💜
Just started my first Jo Nesbø book -- I'm so intrigued by the idea of a Shakespeare retelling in the form of a mystery novel that I couldn't help but pick this up!
Queen of Shadows • ⭐️x5 • I'm basically pacing myself through the Throne of Glass series at the rate of one every six months ... which is like the best kind of torture, given that they keep blowing my mind with how fantastic they are. Character development, romance, plot, and action ... Queen of Shadows's got it all! I could rant for days, but I did my best to restrain myself 😉 Check it out on my blog and Goodreads. Now let's see if I get to Empire of Storms anytime in the next six months 🙈
CLOSED 🚨🚨 GIVEAWAY 🚨🚨
Bring Me Back • ⭐️x3.5 • This was my first B.A. Paris novel, and while I enjoyed it, I wasn't blown away. I had a hard time connecting with the characters and plot, even if it kept me entertained. But I did love the creepy Russian nesting doll aspect, and I definitely want to give more novels by B.A. Paris a shot in the future!
Jar of Hearts • ⭐️x5 • What an unexpected emotional roller coaster! Jar of Hearts is a character-driven, slow burning suspense novel that had me captivated from the first page. I loved getting to know Geo's fierce and flawed character, and it was immensely satisfying to watch all the clues snap into place for a tense and fulfilling finale. Can't recommend it highly enough!
The Word Is Murder • ⭐️x5 • A murder mystery novel where the author writes himself in as the main character looking for inspiration for his next murder mystery novel? Can't say I've heard of that technique before, but it paid off here! This is *such* a delight of a novel. It's incredibly self-aware and meta and hilarious, and the actual mystery plot kept me on my toes the whole way through. I loved it!
Loading Comments...
Comment
×
%d bloggers like this: